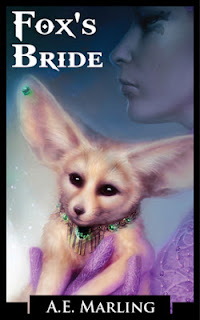 Official AE Marling Website
Get your copy of Fox’s Bride

A desert fox. An enchantress. And a sacrificial marriage.

Everyone in Oasis City worships the fennec fox as a sacred animal, except for the one woman forced to marry him. Enchantress Hiresha believes her fiancé is possessed by nothing more divine than fleas, and she also objects to the wedding venue: the afterlife. Priests will trap her in an airless sarcophagus with the fox. She has only four days of engagement left to live.

Her escape attempt ends in disaster, leaving her at the mercy of the city’s vizier as well as her own pathological sleepiness. She wishes she could trust help from the Lord of the Feast, a past acquaintance with forbidden magic. He warns her that a sorcerer with even fewer scruples than himself may have arranged her marriage, to murder her. To find the truth before it’s too late for her and the fox, she must slip off her silk gloves and break into pyramid tombs.

Enchantress Hiresha’s intelligent fantasy/mystery continues in Fox’s Bride, the wonderful follow-up to Brood of Bones. Marling’s prose beautifully captures the flavor of the desert, creating richly painted scenes. The plot is full of expertly crafted twists and turns, and the characters are brought to you in vibrant technicolor. I loved seeing Hiresha thwarted, regrouping, stepping outside the bounds of what she knows, and growing as she does. She’s not just a focused ‘scientist,’ she’s whimsical, at times callous, and she has a habit of putting her foot in her mouth. Her new bodyguard, Chandur, strikes me as a good-hearted, wonderfully loyal and idealistic but frustratingly dense individual, but he too grows through his experiences, making for a more solid, engaging character. The doings of the Soultrapper antagonist are devious and woven expertly into the tapestry with threads of creepiness and dark humor. Well done! I would have liked Tethiel to figure a little more prominently; I missed his biting wit and dry humor, and the knife-edge relationship with Hiresha developed in the first book only received token attention after his reintroduction. Fox’s Bride flows well, keeps a quick pace, and ends on a strong note. Once again, I am looking forward to Marling’s next book.

This site uses Akismet to reduce spam. Learn how your comment data is processed.

Please note as an Amazon Associate I earn from qualifying purchases. If you purchase something through one of those links it won’t cost you a cent, but I’ll get a small affiliate commission, which helps keep my computer running. Thanks!